Light is a wave or it is a particle? Actually is both of them, as quantum physics explain. As it acts as a particle, it interacts with matter. This interaction is studied by optomechanics. Even in a macroscopic scale light pressure has its effects, light can move a mirror or can make some flat panels rotate. But what happens if the object that interacts with is a nanowire?
In such dimensions (the diameter of the nanowire is 100 nm) quantum mechanics have an important weight on the motion of the resonator, another way to name our nanowire. In this level even the tiny pressure of the light or the contact with some particle might be decisive in our resonator’s motion. If our aim is to study this nanotube’s motion, and as some of you may know, stabilizing the nanowire’s natural frequency is imperative, as we will need to apply our own forces to help us to study its motion. Is at this point where lasers are vital.
As nanowires act as objects with a motion a bit more complicated than the SHM. For this reason, they have frequency, a spring constant and a mass. In order to know its frequency we use a circuit of a collimated and
polarized laser, converged to lower than its wavelength and we make it reflex to our resonator. We detect it with a photodiode and we send our data to a computer via a hardware called Redpitaya.
As we receive a matrix of number it’s hard to know our nanowire’s motion. With the purpose of knowing the frequency we apply a procedure called demodulation, consisting of multiplication of a signal with a known frequency and amplitude (they must be as close as possible to the nanotube’s one) and the application of a device called low pass filter to cut off the noise frequency. This demodulation will give us two constants and with a simple linear equation system we can know the frequency, phase and amplitude of the motion.
Once the demodulation is done, we can apply a signal with a secondary laser and an opposite phase in order to block the motion of our oscillator and make the experiments we want to do! 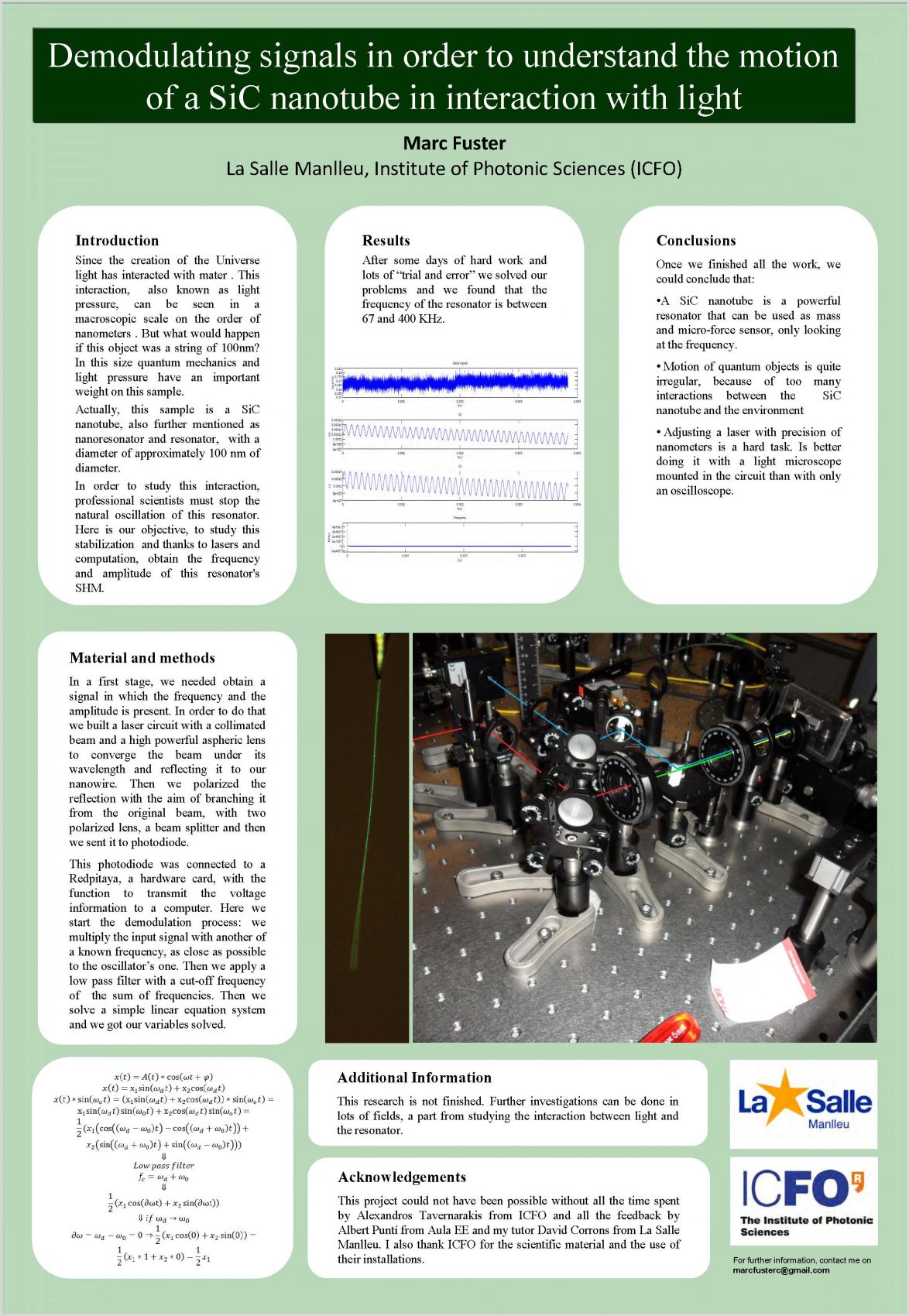 ← Copper nanoparticle study for later application in thin film solar cells Desenvolupament d'un sistema de reconeixement facial →
Back to the projects
Manage Cookie Consent
The website uses proprietary and third-party cookies to obtain information which helps to optimize your visit to this site. We don’t use cookies to collect personal information. You can allow use of cookies, or not, and you can also change settings if you want.
Manage options Manage services Manage vendors Read more about these purposes
View preferences
{title} {title} {title}